We all know that reputation is everything, especially when it pertains to a business. Reputation is something people and businesses take very seriously and spend their entire life trying to maintain because even the slightest mistake could destroy a reputation entirely. Just ask Bill Cosby these days. That is exactly what Island Developers, Ltd (“IDL”), owner of marks FISHER ISLAND and FISHER ISLAND CLUB (the “Fisher Island Marks”), attempted to prevent when a failed business relationship sought to tarnish its respectable reputation that took thirty years to build.

Let’s begin with the history of the island itself. South Florida’s first black millionaire, Dana Dorsey, was the original owner of the island who later sold it to Carl Fisher. When fed up with Dade County’s reluctance to allow Fisher to expand, Fisher and William Kissam Vanderbilt II initiated the legendary trade “My Island for Your Boat”, exchanging Vanderbilt’s 250-foot yacht for Fisher’s seven-acre island in the middle of Biscayne Bay. Nearly ten years after his 1.5 million dollar retreat was built, Vanderbilt died, and although the island was owned by several other millionaires, the private enclave eventually became a ghost town for some fifteen years. See http://www.fisherislandclub.com/History.

Today, Fisher Island is one of the most sought out real estate developments in Florida. It is one of the wealthiest zip codes in the United States and is home to numerous celebrities, including Boris Becker, Oprah Winfrey and Julia Roberts. A survey done by the Census-Designated Place (CDP) found that the estimated median house or condo value on Fisher Island was over $1,000,000 in 2013. See http://www.city-data.com/city/Fisher-Island-Florida.html. This place is exclusive, not just because it’s an island in the middle of a bay. There are no direct bridges – it’s only accessible by ferry or yacht. Additionally, the island is home to one of the most exclusive private clubs. Just to get an idea of how exclusive Fisher Island Club is, to become a member you have to pay a one-time initiation fee of $42,800 and an annual fee of $24,824. 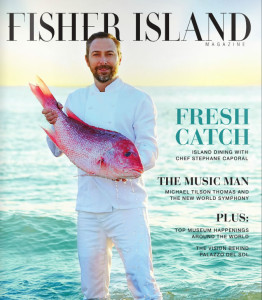 Within a year into the deal, IDL became unsatisfied with the quality of ASI’s products and in an effort to prevent harm to the reputable Fisher Island brand, IDL terminated the agreement with ASI. It’s common understanding that once a publishing agreement is terminated; all work previously done under that agreement is ceased, which was not the case with ASI. Not only did ASI publish another series of magazines under the Fisher Island Marks (automatically infringing since agreement was terminated), ASI subsequently changed the name of the magazine to Fisher Magazine and began publishing magazines under their own entity. This became problematic for IDL because customers starting associating the Fisher Island Marks with Fisher Magazine, thus causing confusion and an interruption of business for IDL.

For instance, when IDL contacted their advertising clients to advertise for its new magazine, their clients thought they had already advertised with them, mistaking Fisher Magazine to be authorized by Fisher Island Club. Fisher Island Club, Inc. v. Arboleya Sulichin Int’l Mktg., LLC, 2015 U.S. Dist. LEXIS 21214 (S.D. Fla. Feb. 23, 2015). Other instances of confusion included customers being confused with who they were subscribing too.

IDL filed a motion for a preliminary injunction and temporary restraining order against ASI in order to prevent ASI from using the marks FISHER ISLAND MAGZINE AND FISHER MAGAZINE (the “Infringing Marks”). In order for IDL’s motions to be successful, IDL had to establish four elements: 1) the likelihood of success on the merits; 2) the irreparable harm that would be suffered if ASI continued to use the Infringing Marks; 3) the injury outweighs whatever damage the injunction may cause ASI; and 4) the injunction is in the public’s interest. Davidoff & CIE, S.A. v. PLD Int’l Corp., 263 F.3d 1297, 1300 (11th Cir. 2001).

District Judge Robert N. Scola, Jr., here in the Southern District of Florida, granted both motions based on IDL success in presenting evidence that established all four of the above elements.

In regards to the first element, likelihood of success, IDL had to prove that the Fisher Island Marks were valid and that ASI’s use of the Infringing Marks was likely to cause confusion. Since IDL registered the Fisher Island Marks in 1997 and the marks had been used continuously for more than five years, the Fisher Island Marks were both valid and incontestable. Tracefone Wireless, 883 F. Supp. 2d at 1224. See 15 U.S.C. § 1065. In addition, as mentioned above, IDL presented direct evidence of actual confusion supporting the seven-factor test used to analyze likelihood of confusion: (1) the type of mark; (2) the similarity of the marks; (3) the similarity of the products or services offered; (4) the identity of purchasers and similarity of retail outlets; (5) the similarity of advertising campaigns; (6) the defendant’s intent; and (7) instances of actual confusion. Safeway Stores, Inc. v. Safeway Discount Drugs, 675 F.2d 1160, 1164 (11th Cir. 1982). Judge Scola ultimately agreed that customers would confuse the two products as originating from the same source.

Judge Scola addressed the irreparable harm element by noting, “a sufficiently strong showing of likelihood of confusion [caused by trademark infringement] may by itself constitute a showing of . . . a substantial threat of irreparable harm.” It’s a 10, Inc., 932 F. Suppl. 2d at 1332.

In addressing the balancing of harms, Judge Scola acknowledge the substantial time and money that went into developing the Fisher Island Marks (thirty years) and held that the potential diminution of reputation outweighed the harm ASI would suffer by not being able to publish magazines under the Infringing Marks, given that FISHER ISLAND MAGAZINE had only been in use for four years and that FISHER MAGAZINE had only been in use for a year. Fisher Island Club, Inc., 2015 U.S. Dist. LEXIS 21214 at 11.

Judge Scola concluded the four-element test by declaring that a grant of the preliminary injunction would serve the public interest. Judge Scola supported his conclusion by quoting, “the ‘public interest’ relevant to the issuance of a permanent injunction is the public’s interest in avoiding unnecessary confusion.” Angel Flight of Georgia, Inc. v. Angel Flight America, Inc., 522 F.3d 1200, 1209 (11th Cir. 2008).

There are a few “takeaways” from this case. First and foremost, make sure that you register your trademark with the United States Patent and Trademark Office as soon as you begin using your mark. One of the best sources of evidence in establishing that your mark is valid is to show that you were the first to use the mark. Here in Florida, registration is prima facie evidence. Meaning that the Eleventh Circuit strongly presumes registered marks to be valid. Tracfone Wireless, 883 F. Supp. 2d at 1224.

Second, making sure that a well-credited attorney drafts your publishing and branding agreements. Wording is life or death when it comes to a contract and even the slightest hiccup could end up costing you a fortune. Although there wasn’t much detail of the terms listed in the publishing agreement from the Fisher case, having essential terms, especially in the termination clause, can increase your chances in court.

If you have questions regarding how to protect your trademark, as well as how to provide record notice of your ownership in your trademark in order to prevent future infringement, please contact us to discuss your legal rights.